So I’ve been informed (made fun) of how long my last post was, so I’m going to try to keep this one a little shorter this time round. I’ve had some stuff come in the mail for two more of my cosplay bits, so I figured I’d talk a little about what I am planning.

I wanted to do something simple yet recognizable for one of the days, preferably for under $30 total for the whole costume. As a result, something that I’ve wanted to do that I thought would be simple and fun is to go as Mary Jane Watson. For the record I was planning this before Alex’s post. Also Alex is gross (that’s right, come and get me fucker). But he’s also hilarious so there’s that.

Anyways, so Mary Jane is fabulous and subtle, but the problem is that when you’ve got a character who dresses in plain cloths, its hard to actually differentiate costume from normal outfit. So I’ve been working with little tweaks that I feel will make the costume a little more obvious. 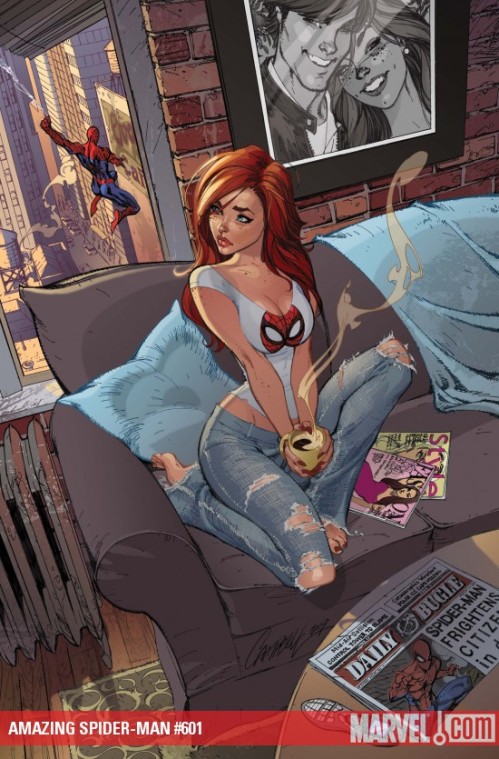 This is the Mary Jane Model I’m hoping to base the outfit on.

Tee shirt, jeans, but the spider man symbol gives more of the MJ

impression which I am a fan of. Found a good shirt for it, not white, but still has that spider sense about it. 😛 I figure I’ll cut more of a bust line into the collar and hack at the sleeves a little bit, to give more of a ripped/torn kind of feel. It wont be exactly like the picture, but it will be my own unique variation on the character.

I also have this adorable little thing.

ITS A BACKPACK THAT HUGS YOU FROM BEHIND!

So the whole costume is just a tee-shirt and a backpack. A super awesome useful backpack that is going to be great for carrying shit around the convention center. I’m pretty pleased with how it is all going to come together.

So I guess the moral of this story is that if you’re thinking about cosing but you don’t want to spend a ton of dough, there are totally options out there for doing so. There are a lot of characters that can be done simply and elegantly. So that’s pretty cool. 😀

So… WE’RE GOING TO COMIC-CON!

So at exactly, 10:55am Mountain Time, (thanks a lot Colorado), my room mates and I finally got to the fabulous confirmation screen stating that we were the proud owners of four tickets to San Diego Comic-Con 2011! BECAUSE WE’RE AWESOME!

The San Diego Comic Convention has long been heralded as the pinnacle of nerd/geek felanderings, every year having panels from all the top upcoming comics, movies, tv shows and other forms of fandom based pop culture. Common nicknames are Nerd Prom, Geek Mecca, Red Carpet… the list goes on.

But even though my room mates and I have been nerds for a long time we have never been to the SDCC. Tickets are coveted and hard to come by, and for us mountain dwellers of the fine state of Colorado, it’s quite the trek for us to make.

So this is going to be a special event for us and we want to share it with you, the internet! We want to document our journey, the building of cos play outfits, the planning of hotels and plane tkts and the like, all culminating in the arrival and time spent at this years SDCC.

So join us! We will be posting a few times a week with personal updates about our journey through this process, both separate and together. Welcome to our adventure!

Also… because I totally haven’t said it enough today,