Playing Dress Up: the Start of my Cosplay Work (Melinda)

So, while most little girls liked to dress up as Disney princesses as a kid, I wanted to be Batman. Well, Batgirl, but you get the idea. I started cosing when I went to a few VERY small local cons when I was in highschool, but nothing too intense. That’s kind of my only con experience, going to these small venues with 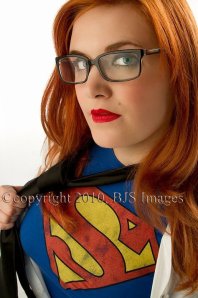 one main celebrity that the whole event was really based around. I went with friends and it was fun but it was never anything incredibly intense.

Now I just do stuff like this in my spare time. Dress up like Clark Kent and get my picture taken.

So naturally one of the things I am SUPER excited about is the idea of cosplay for SDCC. Its like prom, but for people like meeee(nerds)eeeeee! 😀 I get to wear a kick ass outfit that I am super proud of, that I have built/put together myself representing some of my favorite things in the nerd community.  So I’ve been putting a lot of work into research these past few months, before we even had tickets. That’s just how excited I was. I really REALLY wanted to dress up!! Bare with me on my girlish moments…

I have made some very interesting discoveries as a result. Back when I was a kid cosing as Wonder Girl in jeans and a tee-shirt, it was about people throwing in representation for their favorite things. Of course there were folks who got super into it, but they were fewer and farther between, thought that may have just been because of the venues I was at. Often times when I went to con, it seemed like there was a big college costume party and the theme was “Awesome”.

This is no longer the case. It would seem that cosing has taken on a sense of professionally that border lines on ridiculous. And by ridiculous I mean SUPER AWESOME. People building full on body armor, spending years and (literally) thousands of dollars on the costumes that they build out of sheer love. It is so cool. But with SDCC being the red carpet event of the geeky year, it also means that we have to raise the bar for ourselves. As cool as it would be to get featured on a website as some of the coolest costumes there, my greater fear is to be ridiculed on the internet for doing it half assed.

I will not be a half asser! And with that declaration, here’s some of the work I’ve been putting in the past few months, leading into Comic-Con!

So, the friends and I have been planning some group costumes and some separates, but I’ve got a breakdown of both group and non group stuff that I’ve been researching that I am super excited about. The biggest thing for me has been picking characters that I can balance quality and cost with. How can I make stuff look awesome/at a pro level on a small budget? I’m also not much of a seamstress, though I want to learn more. So since I can’t build something from the ground up, the past few months have been scouring the internet for base pieces that I can add little things to. I feel like I don’t need to spend thousands of dollars in order to put together something awesome. I have given myself a meek budget, which honestly I think creates more of a fun challenge.

As a result of cost though, I’ve been working with the idea of doing three mild to medium priced costumes and only one on the pricier side. For now they’re all conceptual, but as I start to gather everything I plan to post production photos and the like for all to see! 🙂 So lets dive right in!

So one of the best new animated shows of the past year, in my humble opinion, has been FX’s smash hit “Archer”. Created by Adam Reed (Frisky Dingo) it is the thrilling and epic tale of Sterling Archer, Codename Duchess, the most inept super spy you will ever meet. Accompanied by his “crack” team of office drones and his partner Lana, Archer works for one of the top spy agencies of the world, which also happens to be run by his overbearing mother, ex black ops agent Mallory Archer. If you’ve never checked out the show, I highly recommend it. Running on FX, it has recently just started its second season.

Its new, its hip, it’s all the rage! So that’s what we shall be cosing as this year. We’re thinking we would probably do this on the day of the Archer panel. I should clarify that one has not been announced yet, BUT there was one last year, so presumably with its great success there will be one again. Adam will be going as our “hero” Sterling Archer and Caitlin will be the lovely Malory Archer. I will be going as the auto-erotic asphyxiation enthusiast/secretary, Carol. Or Cheryl. Or Crystal. She changes her name to fit her mood. Also because no one ever remembers it.

The episode I’m choosing to model the cos after is “Diversity Hire”. Carol normally wears a skirt and shirt kind of ensemble, but in episodes where she becomes obsessed with people sleeping with her, she usually is wearing something that she can rip open pretty quickly.

These are the reference photos I have so far.

I will be the first to admit that these photos are not very good. lol. Please bear with me. Or watch the episode. Either/or shall suit you well dear readers.

This is the base dress that I am planning to acquire.

It still has the buttons, so if I want to alter the outfit into a two piece then I am more than able to, but the crispness of the outfit and the boldness of the colors I think will be iconic enough, though fans of the show if you disagree, I would love to hear your opinions!

The other thing about a show like Archer is the iconic nature of the characters isn’t what they wear. It is the jokes they are associated with. Adding props or makeup additions seem to be a neat, cheap way to really accentuate a character. To make this outfit more recognizable, I want to add two major adjustments. For starters, I want to wear a series of “Hello my Name is” nametags with all of the names she comes up with on the show. Another one of my favorite aspects/jokes is Carol’s intense need to 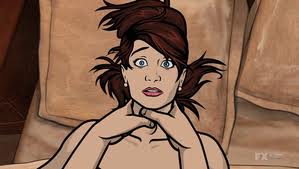 have people choke her all the time. Another little aspect that I thought would make the cos “pop” so to speak would be to have red hand marks around my neck to indicate a recent choking. I felt that would be something easy that would make the character shine through, not just the costume. But again, I don’t know. Fans of the show, what do you think? Too much?

Anyways, I will do another post later this week with the other three costume ideas. I would love to hear feedback on this one though for people who are familiar with the show! So far I think the concept is off to a pretty great start. Can’t wait to start putting it in action!